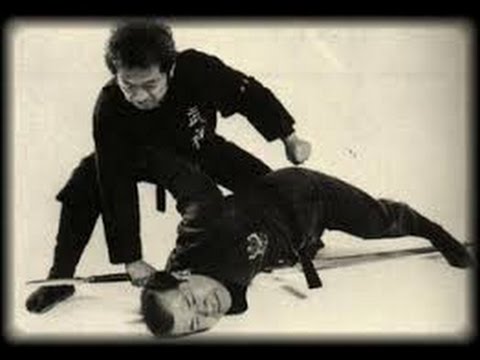 The origins and history of this school can be somewhat confusing, since it combines influences from several schools and over time has been split into different directions and renamed many different ways.

In 1569, during the Yeiroku era (1568-1579), in the Funagata Yama (mountain area) of Miyagi, there was a Chinese mountain priest, from the Abe family, called Unryu (Cloud Dragon). He was an expert in the yari, shuriken, bojutsu, naginata and taijutsu from the Amatsu Tatara Rinpo Hiden Makimono.

The Amatasu Tatara scroll was kept by the Abe, Nakatomi, Otomo, and Monobe families (Takamatsu Sensei’s family and the Kuki family also possessed a copy).

The Dai Nippon Bugei Ryu-Ha gives Unryu’s name as Sounryu. He was a wandering Taoist monk, living in Rikuzen Funagawa, not far from Sanroku Mountain. Some historians have said that Unryu came from Hieizaenji Yama in Kyoto. He studied Sessho hiden no jutsu, a system that uses the yari. The Sessho hiden no jutsu is also known as the Juppo sessho no jutsu. Regardless, if he was a Chinese Taoist and a master of Spear, it is likely that he would have been experience in Bazi Quan, which would later be called Baji Quan. Since Baji originates from Wu dang (birth place of Taoism) from various methods of qi gong, and practitioners of Baji Quan were also known to be adepts with the Spear, I personally don’t believe this is too far a stretch, but admittedly it is still an assumption. What is less of an assumption is that interestingly the art of Tagaki Yoshin Ryu has evolved into a close quarter style, due to being practiced mainly in doors and has been often termed ‘the bodyguard art’, which is identical to Baji Quan today. 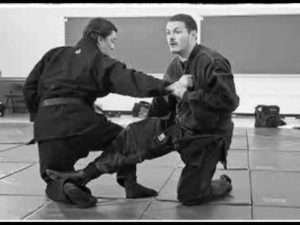 Unryu’s system is thought to be the foundation stone of Takagi Yoshin Ryu, as well as other arts. For example, he taught his system with the yari to a samurai from Katakura Kojuro (in Fukushima province) named Ito Ki-i Morisatada (also called Ito Sukesada). Ito was a famous martial artist of that time (1570’s) and the founder of the Itto Ryu Kenko Ryu.

Historically, the actual founder of this Tagaki Yoshin Ryu was Takagi Oriemon Shigenobu (1625 – 1711), who arrived at the Amatsu Tatara Rinpo Hiden taijutsu school a few generations later. He had already learned a school called Takenouchi- ryu (竹内流), one of the oldest and famous schools of sōgō bujutsu (composite martial arts; 総合武術) of Japan. Takagi Oriemon had learned this school with the second generation, but the problem with the Takenouchi family is that they never give the inner movement, the deepest understanding to someone from outside of the family. That was one of the main rules back in the 14th and 16th century. But he learned enough to create his own school. He received many things and with that he had many matches, fights, and duels with many people. He went to learn and combat the Yagyū Shinkage ryū, and combining elements of Sumo and Jujutsu, with his son, Takagi Oriemon Shigetoshi, he created the school called Takagi Yōshin ryū.

At the beginning of the 18th Century, the current Soke; Takagi Hideshige Gennoshin, invited a Kukishin Ryu master, Okuni Shigenobu Kihei to stay with him and exchange ideas. They adapted each other’s style accordingly, but as Gennoshin lay on his deathbed, he bequeathed his school to Okuni, which is how the Kukishin Ryu and Takagi Yoshin Ryu became interlinked. Also, by the time we enter the 20th Century, the situation had arisen whereby a number of students of one teacher had been named soke of the school. This meant you had different branches of the school, all with different names.

Takamatsu’s teacher in this school was not his grandfather, Toda Sensei, who had already taught him 7 schools by the point he came to learn Takagi Yoshin Ryu, but it was Mizuta Sensei. Mizuta was apparently a very charismatic and sharing character, but he only taught martial arts, he had no other way to make a living. This meant that to make ends meat, he sold quite a few Menkyo Kaidens to various students in order to eat. However, when he met Takamatsu sensei, it was he whom he chose to write out an entire scroll for Tagaki Yoshin Ryu, since Takamatsu supposedly had beautiful hand-writing as well as a good knowledge of Chinese characters. And although he was only 17, Takamatsu Sensei was able to copy and learn the art in just one year, due to his previous training with Toda Sensei. 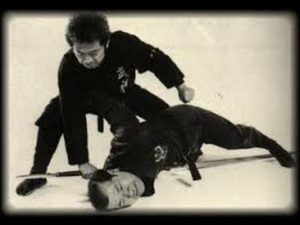 Soke Hatsumi demonstrating Takagi Yoshin Ryu’s application of controlling an opponent to the ground, and in this case with the school’s signature weapon; the Yari

This is why the Bujinkan take on Takagi Yoshin Ryu is a little different to other variations of the school, because although it is a jujutsu school, it has been learned through the eyes of the last real ninja, Takamatsu Sensei.

In terms of the school itself, there are no set kamae as in other schools, but the way of sitting on the floor is important. There are various methods, the same as in Shinden Fudo Ryu, and your ability to maintain a straight spine, a focus, an awareness, will dictate your spiritual attitude (Kamae). Takagi Yoshin translates as a willow tree’s spirit bending itself with the pressure. It is this feeling, like aikido, that allows the Takagi Yoshin Ryu practitioner to use their opponent’s energy against them, which is a special aspect of jutaijutsu schools. However, unlike Aikido or Judo, the throws and locks are performed in a way that does not allow the opponent to ukemi (roll/escape), making the techniques much more controlling, like a bodyguard.