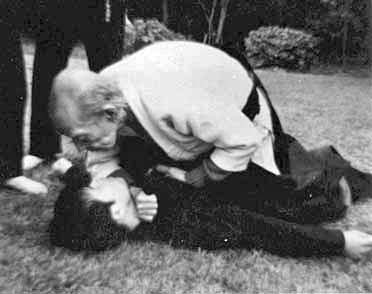 There are actually 3 different styles of Japanese martial art that use the title Shindenfudo Ryu, which means the School of the unshakeable heart (or some translate it as the school of the immoveable god). They are comprised of 3 makimono (densho). Two of these densho, Jutaijutsu and Dakentaijutsu are taught within the Bujinkan. Whereas the third school of Kempo is a separate jujutsu school and is thought to be the forefather to Bartitsu which was an English form of self-defence, made famous by Sir Arthur Conan Doyle, since it was fictiously employed by Sherlock Holmes.

Shindenfudo Ryu has a long history in Japan. Originally it was called Shiden munen ryu. The main 3 aspects of this school were yari (Spear), Iai (Sword drawing) of the long sword and taijutsu (body movement). Other sources claim it was called Ban Shinden Ryu dating back to the 8th Century, and that at some point it was renamed Seisin or Shoji Fudo Ryu. There are a number of conjectures as to who actually founded ShindenFudo Ryu, but nothing is certain, since the many of the sources are inconsistent. However, what is often agreed upon is that the originator had learned Chinese Kempo. What style of Chinese Kempo, we cannot be sure, but the movement of ShindenFudo Ryu is very similar to classical Baji Quan in many respects. In fact the very first technique of the Dakentaijutsu; Nichigeki, is Baji Zhan, the most fundamental stance of Baji Quan or Bazi Quan as it would more likely have been termed at the time. The last part of the Densho is written in Chinese, not Japanese, when describing the weapons. So we can see the blatant influence of Chinese Martial arts on this style. Regardless, the first official soke of the school for Dakentaijutsu was Izumo, Kanja Yoshiteru (Kumano) -Yeikyu era (1113 A.D.) who was also the sole of Kukishinden Ryu,  and for Jutaijutsu the first some was Shigemura Masahide who was the chief priest of a Shinto Shrine in the 12th Century. He taught his student, Asashina Goro Minamoto-no-yoshihei, who first titled the school Shinden Fudo Ryu Jutaijutsu.

Edward William Barton-Wright, a British Engineer, who created the British Martial art of Bartitsu, based on his learning of Shinden Fudo Ryu Kempo whilst in Japan

The second soke of the Dakentaijutsu, Minamoto Hachiman Tamenari, is credited as being the official founder. At some point in his life he fled to Iga province, which of course is the district most famous for Ninja. This was possibly a result of being on the losing side at the end of a battle. One of the secret attributes of the Shinden Fudo Ryu is the “Principle of Nature“. In the Dakentaijutsu, there are no stances- Shizen no kamae represents the ‘natural posture‘ and holds no fixed form. Hojojutsu, the art of tying someone with a length of rope, is also taught in this Ryu-ha. Also taught are several different types of yari (spear), Ono (war axe), O-Tsuchi (war hammer), naginata and Iai with the nodachi (long sword). In fact many of the techniques of the Dakentaijutsu are executed with the practitioners wearing at least 2 swords, which means the Uke must always land on his or her feet when thrown, since rolling or break falling would cause an injury with swords held in the obi. The Dakentaijutsu incorporates a lot of strikes and throws, whereas the Jutaijutsu techniques are primarily to deal with opponents who will try to throw, grasp or punch you. The focus of the Jutaijutsu lies in Nage waza (throwing techniques), Hajutsu (freeing techniques), Gyaku Waza (joint twisting), Shime Waza (Strangling/choking), Tori te (holding and knocking down), Kansetsu Waza (Joint locking), and Osaekomi Waza (restraining techniques).

Kamae was not originally taught, since this type of martial art was taught to a warrior with experience. The tuition of kamae as a basic came about when you had to teach someone from scratch. The problem is that when you systemise something like martial arts, you are in danger of losing the flow. In reality, you flow not from kamae to kamae, but kamae flows through the movement. The idea of natural movement, or moving in the flow of nature, is an overriding theme in this school. Training in nature was considered mandatory to make the body strong and supple. Training stances with trees on your back, bending bamboo with throws, ripping tree bark with the hands, punching and kicking trees and stones was all part of natural method of training Shinden Fudo Ryu in nature. 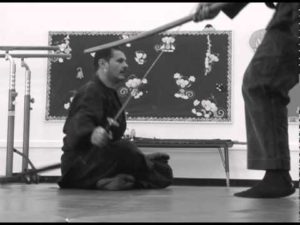 Today kamae are taught as part of the teaching process: The standing kamae are Hira, Hira ichimonji (flat open posture), seigan (arm a little bent like the standard ichimonji), Katate (like seigan but arm completely straight) and Zanshin (feet close together, hands on front of hips – this looks very humble for the palace where everyone would walk in such a fashion around the Emperor). Yet there are also sitting kamae known as Ansen, which means you have to be calm and pacify the area. Anza actually means safe (safe for the body, in terms of alignment, but there are different degrees of safety in terms of your environment). There are 6 different versions of zagomai (sitting), known as fudoza (you sit on one foot and have the other leg across your front), fudoza with the front foot on one knee, fudoza with the front foot on the hip, upright fudoza on the toes (used with hakama so you do not see the true height), the okuden level is to sit on both heels with ankles crossed and knees in the air, and half lotus (Agura). This is seiza which has two meanings (it does’t mean how to sit as is commonly thought): it means relaxed or correct. Half lotus and fudoza were common sitting positions for the warrior. It allowed them to be alert, ready, aware, but also relaxed, calm and peaceful.

Shindenfudo Ryu is a very interesting school since it is the first one with Kotō-ryū that Takamatsu sensei learned from his grandfather, Toda sensei. (Some people say that it’s his uncle, it’s dependent on the translation. Sometimes it’s written sofu (grandfather; 祖父), while sometimes its Oji-chan, which depending on the kanji can be “my grandfather” (お祖父ちゃん), “my uncle” (叔父), etc. If you read the Takamatsu Sensei Meiji Mokuroku, the kanji used means grandfather. It is the father of his mother, not of his father. Which is important in Japanese genealogies and inheritance. Otherwise Takamatsu sensei’s name would be Toda). Toda Shinryuken Masamitsu, the 24th soke, was a samurai, and a master in the Bikenshin Ryu. He was also a sword instructor to the Tokugawa Shogunate. Toda Sensei’s dojo even had a plaque above the door which read: “Shinden Fudo Ryu Dakentaijutsu”.

Toda actually wrote 5 rules for Shinden Fudo Ryu which should be abided by the practitioner of the school:

1. Know that endurance is simply a puff of smoke.
2. Know that the way of men is justice.
3. Forget the heart of greed, comfort and be self sufficient.
4. One should regard both sadness and malice as natural laws, and just gain the enlightenment of the immovable heart.
5. In your heart, never leave the ways of loyalty and respect for parents. Aspire to learn both the pen and the sword.

These are all things we need to contemplate in our own training.