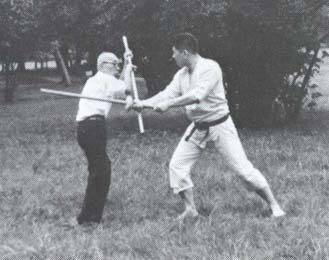 The Kukishinden Ryu originated sometime in the Kamakura period (1184-1333) and it’s name means ‘School of the Nine Divine Demons’. The first registered Soke was Yasushimaru Kurando Takazane who lived at the beginning of the 14th Century. Kurando was a samurai in service to Emperor Go-Diago who ruled 1318-1339. He supported Go-Diago in his fight for the throne. He was therefore granted the family name by the Emperor of Kuki (Nine Demons) – considered a spiritual name for a spiritual warrior. Supposedly since then the bo staff in Kukishinden has been taught in “9 ways with 99 techniques.” In fact Kukishinden Ryu was founded originally as a Bo school, but then it began to adapt over the centuries due to the changes of warfare and weapons in both war and peace.
There are now 8 large sections in the Kukishinden according to the Bujinkan denshos, known as Happo (8) Bikenjutsu or Hikenjutsu (Biken is an elaborate sword which refers to the traditional but continually evolving fighting techniques, whereas Hiken is a secret sword which pertains to secret knowledge within the school)

The 8 large sections are:
1. Rokushakubo, Taijutsu, Hichojutsu, Maai (6 foot staff, body movement, jumping techniques and distancing)
2. Gunryaku Tenmon Chimon (Military Tactics and Combat Strategy)
3. Jojutsu, Hanbojutsu (4 foot and 3 foot stick fighting techniques)
4. Bajutsu, Suijutsu, Kajutsu (Riding with archery, techniques in water, fire and explosive materials)
5. Nawanage (techniques when dealing with rope)
6. Kenjutsu, Kodachi, Jutte, Tessen (Long sword, short sword, metal prong/fork for sword disarming, fans)
7. Sojutsu, Naginata, Bisento (Long pole arm weapons such as spear and sword lance)
8. Shuriken, Senban, Tokenjutsu (throwing stars, throwing square blades, throwing knives)
Hatsumi Soke has written that; ‘In order to understand this school, it is necessary to establish a connection from heart to the sub-conscious as this is the basic requirement for all techniques. When we practice the techniques in nature, it is easy to use these for ourselves. We let nature in its purity work its magic on us and use this power to learn about oursleves.” 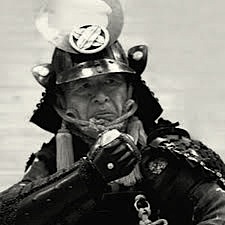 The kamae (body position and spiritual attitude) for the techniques in this school are specific to the environment in which it had been used. Because it was a school whose techniques were mainly used in war, most of the positions involve the arms being close to the body (One of my original instructors, Shihan David Heald – who held a Menkyo kaiden in Kukishinden Ryu, would have us tie our belts around our upper arms to our bodies, so it was only our lower arms, from our elbows to hands that were available for use. This meant we had to move in a way in which our legs did most of the work). There were two reasons for this: it allowed an armoured samurai the chance to stand in kamae for a long time without being overly burdened by the weight of his armour, and it also guaranteed greater protection of the arms, particularly the unprotected inner arms. Also, because many Japanese seamen and pirates used this Ryu, the leg positions became low (bearing the armour in mind), spreading the weight as evenly as possible over both legs in order to provide beter balance on a rocking ship.
The fundamental kamae of Kukishinden is Seigan no kamae which has the forward arm or weapon pointing towards the eyes or heart of the opponent. There is also the principle that, “your own eyes weaken the eyes of the opponent,” if you keep eye contact with him/her.
The Taijutsu of the Kukishinden Ryu stems from Yoroi Kumiuchi (wrestling matches in armour) and so at first the movements appear rather ponderous, cumbersome and slow, but in reality they are very powerful and targeted: All the techniques serve to position the opponent in such a way that gaps appear in his armour, he is restricted in his freedom of movement and his balance is unstabilized. Originally, Kukishinden was a school based around the use of the Bo staff, hence you see the rokushakubo paired with taijutsu in the first section of the school, and not with the other pole arm weapons. The Bo in question would actually have been very thick with chunks of metal attached, making it very heavy. One can see how the prescribe method of movement for the style was necessary to move such an instrument.
The Dakentaijutsu of the school originates in some way from Shindenfudo Ryu, Takagi Yoshin Ryu and Gikan Ryu, but on the other hand Kukishinden greatly influenced Aikido, Kodokan Judo and Kobudo.