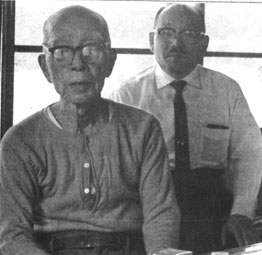 This school, which is one of the 3 ‘ninja’ schools (as opposed to the 6 ‘samurai’ schools of the Bujinkan), is not officially taught in the Bujinkan curriculum, and so it raises the question why is it part of the Bujinkan at all? Well there are a number of answers to that, many of which include Soke Masaaki Hatsumi choosing to not devulge all his teaching to joe public; to only a select few. Although this maybe true, the essence of the Gyokushin Ryu has been taught in both seminars, lessons and on video. Hatsumi has officially said that Gyokushin has no named techniques, but strategies and free movement so it is likely that he doesn’t formally teach them because there are no kata to actually teach.
It is believed that Gyokushin Ryu’s founder, Sasaki Goemon Teruyoshi, who founded the school in the 16th century, was originally from the Gyokko Ryu lineage, or that at least the techniques of the Gyokushin Ryu were based on the Gyokko Ryu techniques. Gyokushin Ryu focuses mainly on stratagem and espionage, rather than combat, which is typical of most ninjutsu schools, since their techniques were mixed with other combat schools early on already. Sasaki Goemon’s son Sasaki Gendayu, was employed by the Daimyo of Kishu, and was paid 200 Koku per year (one Koku was enough to feed one man for a year), this was later raised to 400 Koku per year. It is highly possible that he, like his father was highly skilled in the Gyokko Ryu as well as Gyokushin Ryu. Gyokushin Ryu practitioners also came into contact with the Togakure Ryu, but in time the Gyokushin Ryu split into 3 different directions: Kosshijutsu (Ninpo Taijutsu), Koppojutsu and Jujutsu. However, since they split, all 3 Gyokushin schools have had no connection with eact other in the meantime.

Takamatsu Sensei with Ueno Takashi, possible Soke or Former Soke of the school

The Gyokushin Ryu was taught in the Kishu and Takeda Fiefs. This possibly happened in the 1600’s, and it was then that it came into contact with the Togakure Ryu. It is not known in the west as to what the fighting techniques of the Gyokushin Ryu are. All that is really known is that it uses sutemi throws. What is known is that this school concentrated more on the espionage side of ninjutsu, rather than placing as much emphasis on the fighting side. It has been said that the specialties of this ryu were the kusari fundo, ninjutsu, koppojutsu, jutaijutsu, kenjutsu and Iaijutsu, although we have no confirmation on this. Hatsumi says this about the Gyokushin Ryu in his book “Hiden Ninja Submission”…”It is a faction of kosshijutsu and was founded by Sasaki Orouemon Akiyari. A characteristic of the ryu is found in the kind of weapons it uses. Gyokushin Ryu is known for its superior use of nagenawa; a lasso.”
From what little has been taught on Gyokushin Ryu, the style appears to be about expansion and inserting yourself into the opponents movement as well as the use of the rope, or lasso. The unarmed techniques would appear to be based on the Gyokko Ryu, and are very similar. The kamae for example, such as Ichimonji no Kamae, is exactly the same. It uses bent arms and (iron) fingernails for striking, and like the Gyokko Ryu, there are only a few steps per technique; the majority of the body movement comes through the shifting of weight by bending the knees.
The Sasaki family kept the teachings of the Gyokushin Ryu secret, and it was not until it passed to Toda Nobutsuna and was taught along side, and mixed with other schools, that it came more out into the open. Because of this secrecy there are two people laying claim to being the Soke of this school. One is Hatsumi Masaaki, and the other, Ueno Takashi, is also an ex-student like Hatsumi of Takamatsu Toshitsugu (some people believe him to be a relative of Takamatsu). Both give different lineage. The Dai Nipon Bugei Ryu-ha book lists Ueno lineage and has no mention of the Toda-Takamatsu-Hatsumi line so somewhere in the eight missing generations someone either split a school or gave it to two people. Ueno Takashi is reputed to have been covered with tattoos, and was very friendly with the local Yakuza. It is possible that Ueno Takashi is dead, and that the new inheritor to this version of the Gyokushin Ryu is Kaminage Shigemi, although I cannot seem to find Kaminage actually openly claiming that anywhere, but that does not mean that he does not have the sokeship, just, as in typical ninja fashion, he chooses not to tell the public about it!

Minoru Mochizuki, Founder of Yoseikan, reportedly based on Gyokushin Ryu

As well as these two soke claims, the founder of another school, Yoseikan, called Minoru Mochizuki is said to have based his school’s teachings on Gyokushin Ryu Jujutsu. Kano Jigero, the founder of Kodokan Judo, was a friend of Takamatsu Sensei. It is possible that Takamatsu taught at the Kodokan as a guest instructor and that what he taught there was the Gyokushin Ryu. This also makes the claim by Mochizuki believable. He was born in 1907, and started Budo at the age of 5 years old. He studied many things such as Gyokushin Ryu Jujutsu. At the age of 26 he joined the Kodokan, and in 1928 was promoted to Sandan. At this time he was living in Tsurumi. Mochizuki says that the suitemi techniques taught in the new martial art he has created, the Yoseikan (also based on Judo, Aikido, Karate, and Katori Shinto Ryu), come from the Gyokushin Ryu. Mochizuki was a student of Kano at the Kodokan, and holds the rank of 8th Dan in Judo, he therefore probably met Takamatsu at some point, but there is no guarantee that he was taught Gyokushin by him or not!